We have well over 400 cameras on display at Seawood Photo. Many are odd and interesting, yet by far the ones that elicit the most comments are the machine gun cameras. 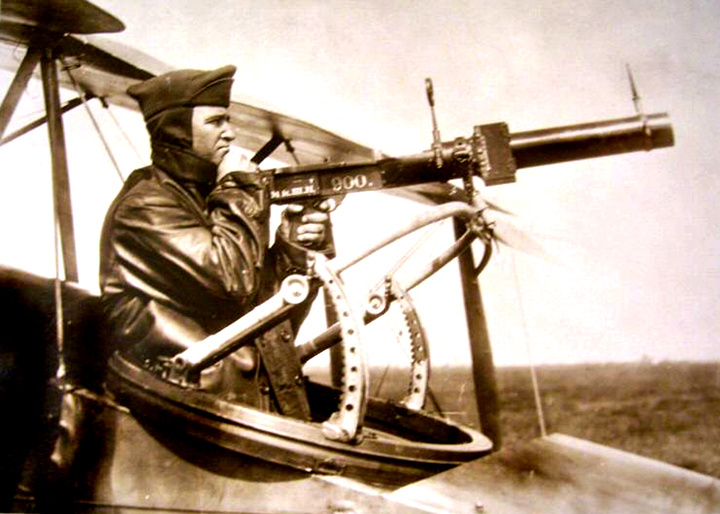 We have six of these unusual cameras from the U.S., England, and Japan spanning WWI to the Korean War. Perched over the camera bar, they look ominously down on the store like they are guarding the store. While they look like actual guns, they were actually used to train gunners by shooting photos instead of bullets. Crosshairs or reference lines show up on the final photographs, showing the user to see if he actually hit his mark. The cameras were sometimes mounted on aircraft to photograph aerial combat practice, or tripod mounted for ground use.

This is an aerial version of the Lewis, with extended trigger guard to allow use while wearing heavy gloves. 120 rollfilm cartridge mounts in rear of gun. Removable drum assembly has two slots that hold spare film magazines. The Dallmeyer 12” Antistigmat taking lens is located underneath the barrel. 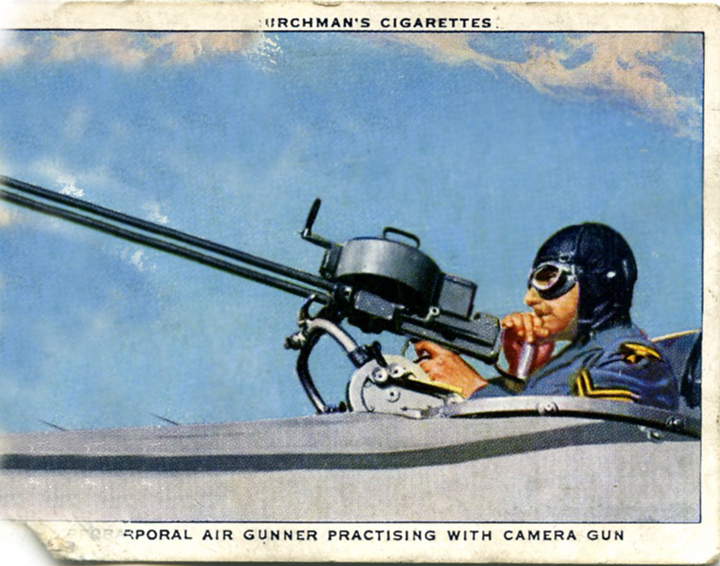 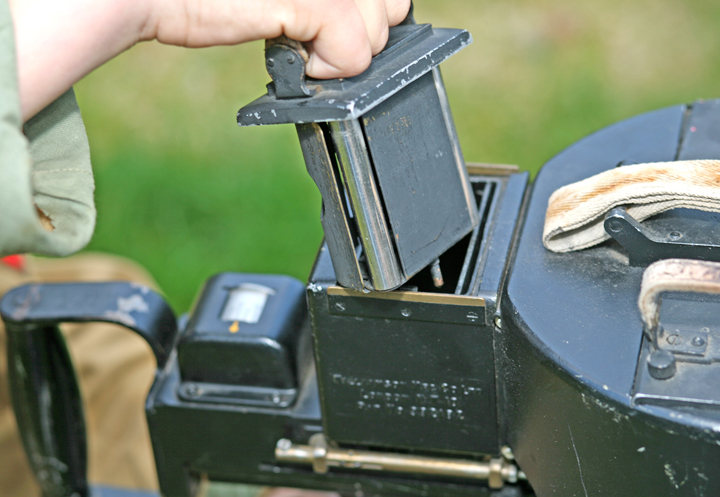 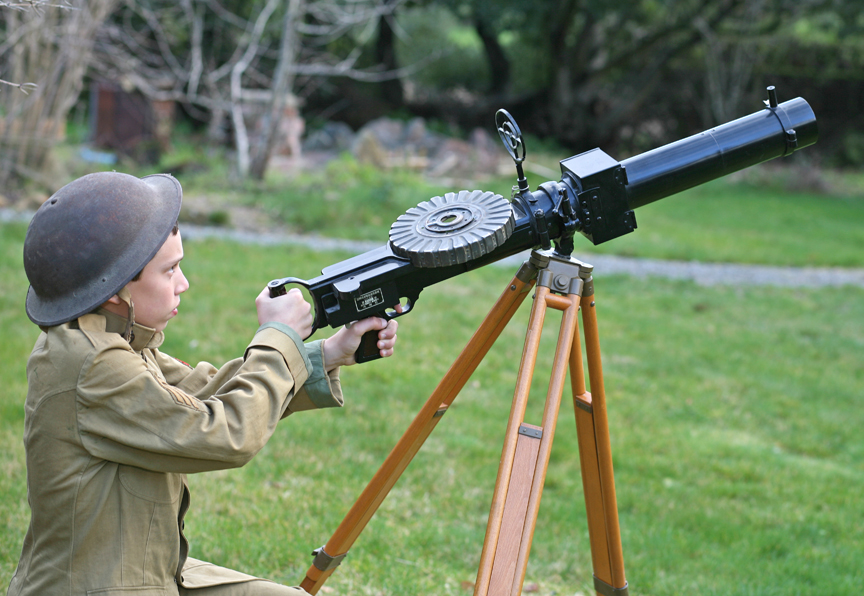 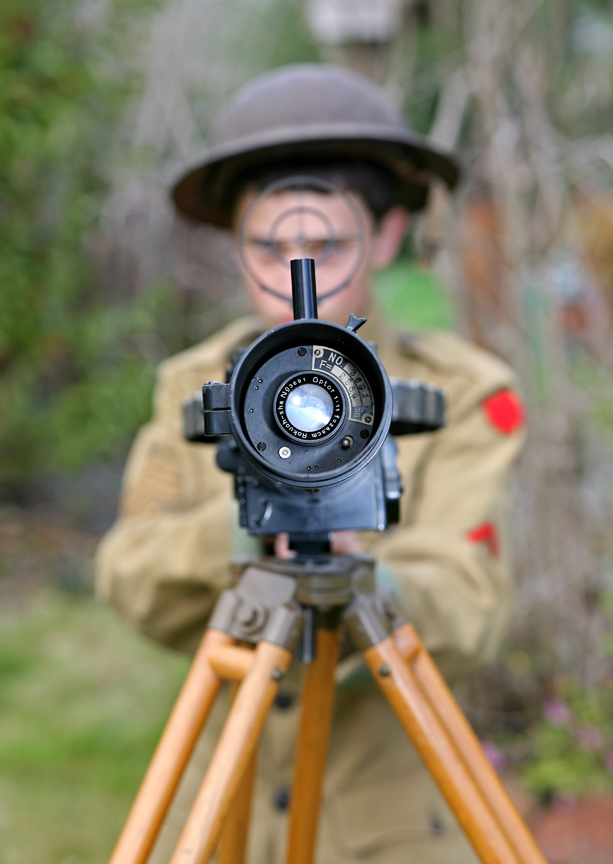 This is a Japanese copy of the Thornton Pickard. Odd that they would copy this verbatim, as the closest gun they actually used was called a Type 92, and was functionally very different in design. Also uses 120 roll film. The lens is an Optor 28.5cm f11.

I was curious to see how these cameras operate, so I chose the Rokuoh-Sha and the Williamson as they both use readily available film and both seemed to be in working condition. As there is no book depository or grassy knoll in San Anselmo, and as police get quite excitable when confronted with heavy machine guns, I decided it best to set these up in my own back yard. The Rokuoh-Sha is big and heavy. It is mounted on a large wood surveyor’s type tripod, and feels very solid. Film is loaded in a cassette that fits in a box between the receiver and the gun barrel. A glass plate with a grid pattern etched on it slides just in front of the film plane. The shutter is cocked and the film is advanced by pulling back on a bolt lever on the left side of the camera, as if cocking a gun. When the trigger is pulled the bolt slides forward with a loud clunk and the shutter is released.

The Williamson has a rear-mounted film cassette, and receptacles for two spare cassettes located on the drum. Operation is basically the same as the Rokuoh-Sha, but the fit and finish of moving parts is much more crude. Photographic results were rather disappointing. The Williamson shots appear as a smear of light; the shutter was obviously hanging up. The Rokuoh-Sha fared much better, but as you can see the images are soft and have very little contrast. I guess as long as they could see a target on the film the military brass was happy with these cameras. Not going to replace my Hasselblad! I’ve seen photos of a German MG42 machine gun camera…I wonder if the optics would be better? 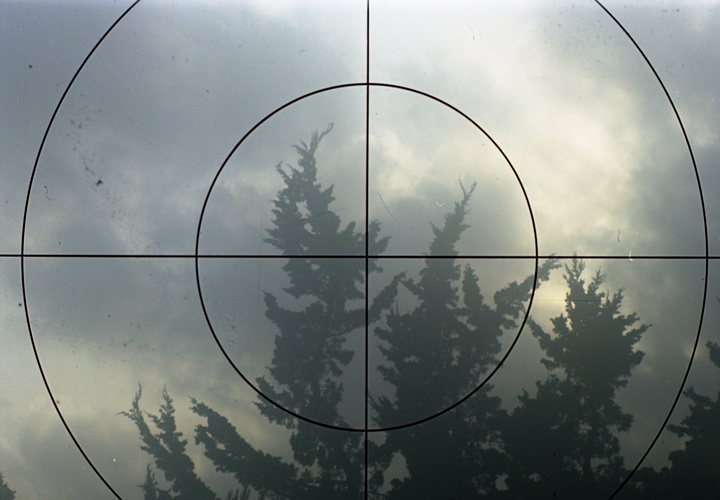 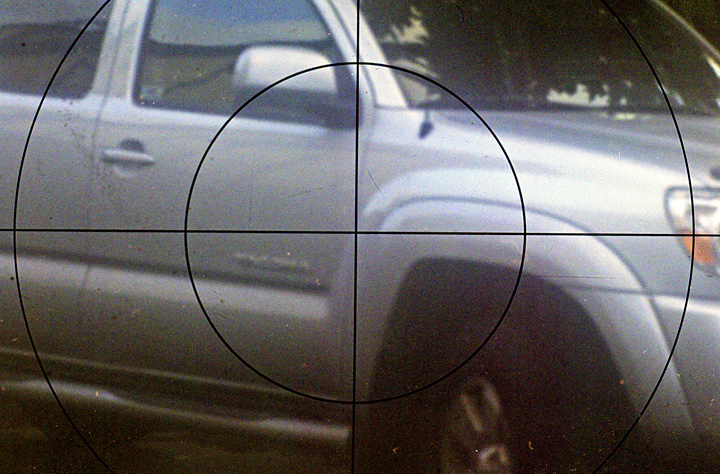